It’s a great blueberry season – and still going. You can see other pictures on the blog of my structure and netting I built to protect these from the birds. There probably will be enough to share without using the netting this year.
Two things I did – during winter, I cut them back rather severely (we have six large bushes over 6 feet high), and also had a soil test done showing the bed needed sulfur – which I added. And, as I said, wonderful crop this year.

We truly have an abundance of so many things – mainly God’s blessings.
“May there be abundance of grain in the land; on the tops of the mountains may it wave; may its fruit be like Lebanon; and may people blossom in the cities like the grass of the field” Psalm 72:16
“Blessed be the Lord, the God of Israel,
who alone does wondrous things.
Blessed be his glorious name forever;
may the whole earth be filled with his glory!
Amen and Amen!” Psalm 72:18-19 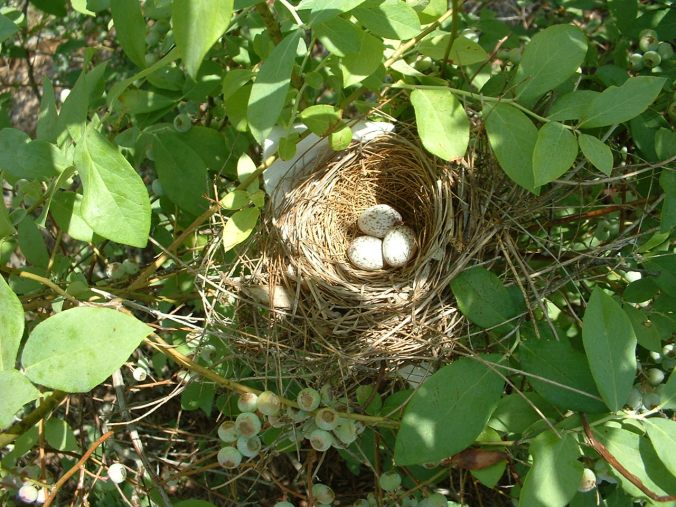 I’ve never thought of cardinals as crafty and clever birds, but when it comes to something good to eat, I found they will go to great lengths to get it.

Several years ago I planted six blueberry bushes in the backyard. The next year they were large enough to bear fruit, so I kept checking them during the spring days. I was excited during the weeks as the berries turned from green to purple. Finally, one Saturday, I declared that the next weekend would be blueberry picking time. The bushes were still small and there weren’t a lot of berries, but I still looked forward to having some from our own bushes.

I didn’t have time during the week to check them, but, on Saturday morning, I went out in high anticipation with my bowl ready. My jaw dropped and my heart sank when I found the bushes empty. During that week, the birds, (mostly cardinals around our house) had helped themselves and cleaned them out.

The next year and several years after that I put up PVC pipe to make a frame and put netting over the bushes. I used twist ties to put the sections of netting together and attach it to the frame. That would work for a while, but after a week or two I would look out the back door and see a bird in the bushes, about to kill itself trying to get out the netting. I’d open up the entrance way and shoo him out. As the season went on and the birds seemed to get smarter, I would have to let a bird out 2 or 3 times a day.

Each time I would look around for holes in the netting. Sometimes the pvc had shifted or leaned and left a gap. Sometimes the pins holding the netting to the ground had come loose. I did watch to see how the birds got in. One day I saw one jump off the pvc onto the top netting. The bird’s weight caused a seam to open between two sections and he hopped through it.

Last year, I built a sturdy frame of 4X4’s and 2X4’s to hold the netting, including a 2X4 runner at ground level. I stapled the netting to the wood, and used squeeze-on clips to connect the pieces of netting. That kept them out until the last week or two of harvest season, when I noticed a couple of rabbits inside the netting and found that they had chewed holes in it. The birds followed them through those, but also figured out if they flapped hard enough on the netting in some places they could work their way between two overlapped pieces and get in.

When I built the frame and installed the netting, I set it up to be able to roll the netting up and secure it with cable ties to uncover the bushes (for easier access for me and the bees). After last season, I did that, and the netting has been rolled up since then. (you can see a picture on last week’s blog)

The flowers came and the berries began filling out on the bushes – hopefully for a good crop for this year. So, last Saturday, I decided it was time to lower the netting, staple it to the runner, and put a strip of chicken wire at the bottom to keep the rabbits from chewing holes.

As I neared the bushes, a cardinal flew out. I looked to make sure there weren’t any others there, and let out an “oh, no!” at what I saw. I moved closer and thought “maybe not, maybe not”. But, then I stood on tippy-toe and peered into the nest I had found. There were three cardinal eggs in the nest.

As I said, “crafty and clever” describes a cardinal. This one went so far as to build a nest and lay eggs, knowing that I couldn’t lower the netting and separate them (and the blueberries) from the mother bird. What a devious plan – but, maybe the little ones will hatch and be out of the nest before the berries are completely ripe. We shall see.

“And ye shall seek me, and find me, when ye shall search for me with all your heart.” Jeremiah 29:13.

We can learn from the cardinals’ diligence (without the need for any craftiness or cleverness) in finding what they were seeking. As the verse says, if we search for God with all our heart, we will find him. He has always been there and always will be.