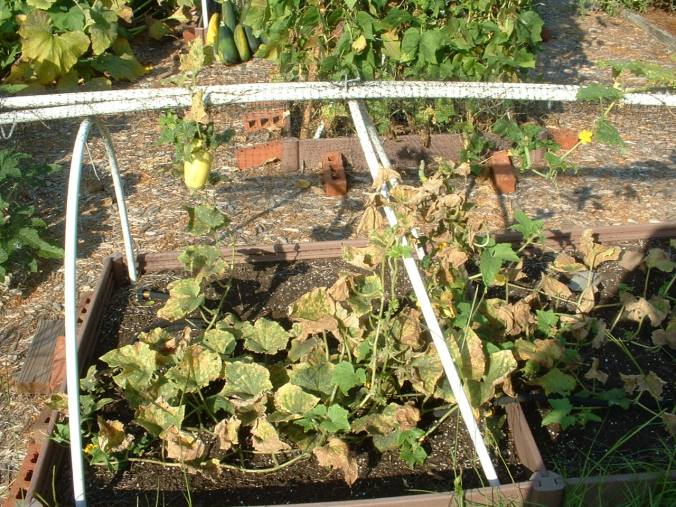 God really blessed my vegetable garden this summer. If you’ve followed my blog you’ve seen some of the pictures of zucchini, peppers, beans, etc. etc. I truly enjoyed the growing and eating!

But, the cucumbers had a problem. They were slow to sprout (some had to be replanted) and never made it as you can see from this picture. That was a surprise because last summer I couldn’t keep up with them. If I skipped even a few days of picking, they outgrew their good and became too large and tough with giant seeds.

Last year we had more than needed, so I was able to pass the extras around (and that’s one of the best blessings of a bountiful garden). But not this year. The vines looked like they had a disease or other malady but I don’t know what it was. I may try to do a little investigation before next year.

However, I am optimistic about next year. Even as the vines were sitting there fading away this year, I bought a neat frame with netting that the cucumbers can climb up and around. I won’t hesitate to try again with the hopes of numerous burpless cucumbers for eating and giving away.

Being a gardener (or a farmer, or many other undertakings) requires hope. We look forward to next week or next season, or next year with hope. That also follows our walk with Christ. But the “hopes” have different meanings.

I will hope for a good cucumber crop next year – and it may or may not happen.

I will put my hope in Christ in all things – and that hope is assured because of Who He is and what He has done for me. “My hope is built on nothing less, than Jesus’ blood and righteousness!” That’s a hope that will not fail.

“Blessed be the God and Father of our Lord Jesus Christ! According to his great mercy, he has caused us to be born again to a living hope through the resurrection of Jesus Christ from the dead,” 1 Peter 1:3 ESV