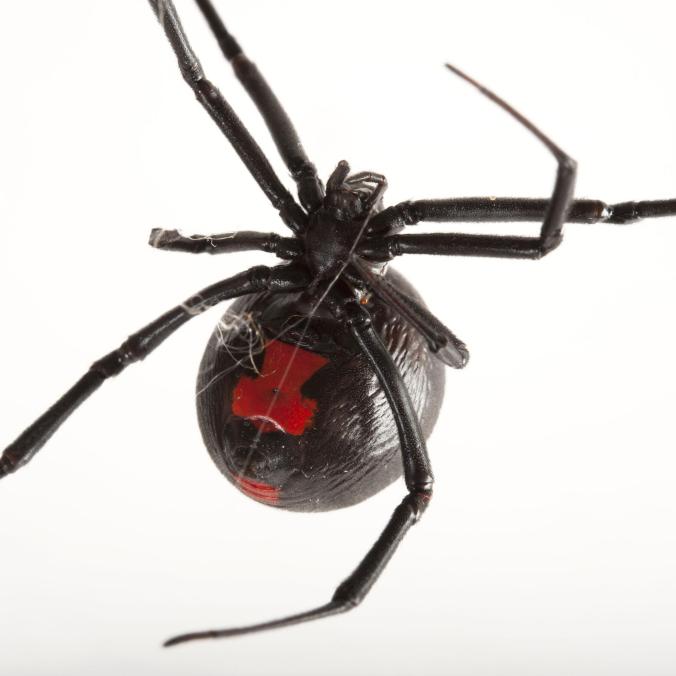 My wife, Sharon, is the only person I know who has been bitten by a black widow spider. One day she took her sweater from the coat rack, put it on and felt a sharp sting on her arm. She smashed her hand on the stinging spot, shook her sleeve and the flattened spider fell out. The telltale red hourglass-shaped marking on its shiny black body confirmed what it was. Sharon sealed her attacker in a plastic bag and took it with her as she drove to the hospital.
Everyone at the emergency room was excited because no one had ever seen, much less treated, anyone with a black widow bite. It seemed to Sharon the entire hospital staff stopped by to inspect the spider and the bite marks on her arm.
I was excited too when summoned from an out of town meeting to take a phone call. Sharon told the story and assured me the doctor said everything was okay. The anti-venom was on its way from Atlanta and would be at the hospital in a few hours. Most importantly, she had no extreme symptoms. I trusted her assurances, but it was still a long trip home to see for myself.
The doctor administered the anti-venom when it arrived that evening. Sharon spent the night in the hospital for observation and was released the next morning. Thankfully, the worst effects of the bite were the five days of mental fog she endured from the prescribed mega-doses of antihistamines.
“How did a black widow spider get in her sweater?” I claim the dubious honor as the agent of that. It was winter and we were using the fireplace. At times, I brought in pieces of wood and stacked them on the floor next to the wall. If you picture the wood piled on the floor next to the wall, and move your gaze up, you come to…the coat rack. Apparently, the spider hitchhiked inside on a piece of wood, crawled up the wall looking for a dark hiding place and chose Sharon’s sweater sleeve.
Like most people, it wasn’t our practice to bring poisonous spiders into our house. However, the one that got Sharon was sneaky – we didn’t notice it because it was hiding in something useful that we often brought inside.
Spiders aren’t the only sneaky things we need to watch for. Every day we bring useful things into our homes through television, books, and the internet. These can help us learn and grow, make us think, or simply entertain us. Most importantly, these media are powerful tools that can help us as we seek to be closer to God.
But there is a negative side to the words and images they contain. Those that are blatantly evil are more easily avoided, but we might miss the sneaky ones unless we’re diligent. Subtle messages can hide among the action, information and laughter.
A scene can have a funny line, but the action may portray sex outside of marriage as not only acceptable but expected. Scripture can be taken out of context or given a slight twist to make a misleading point. Tolerance of sin (sin, as defined by God) may be constantly presented as a greater virtue than living by Biblically based standards.
As subtle messages like this sneak into our mind, they can eventually harden our heart to what is truth. Thus, we should constantly watch for them and as Proverbs 4:23 says: “Keep your heart with all vigilance, for from it flow the springs of life.” ESV
Sharon and I don’t have poisonous spiders sneaking into our coats or sweaters anymore because I carefully examine all the wood before I bring it in. Perhaps that’s the process we should follow with all things we bring into our homes.